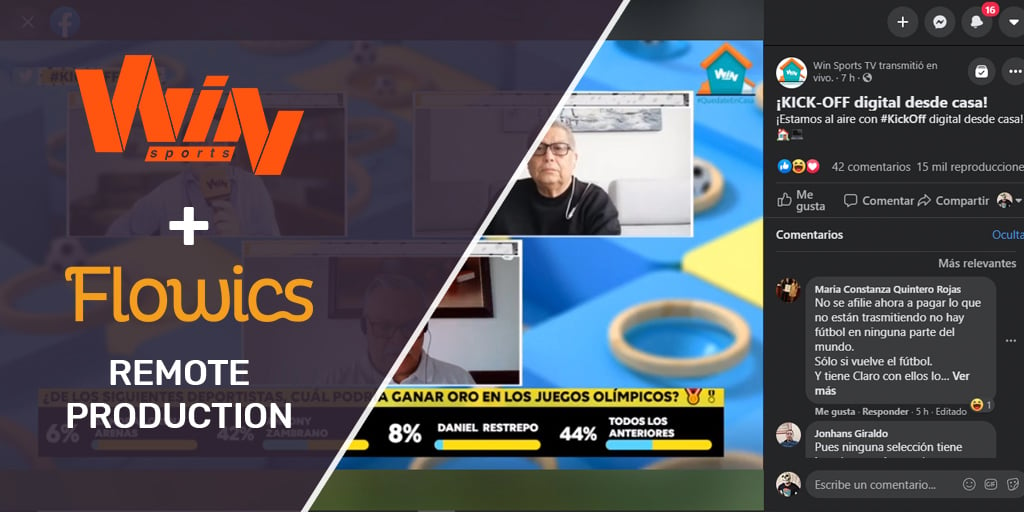 In recent posts, we’ve shown how broadcasters and TV shows are having to quickly get their operations on the cloud and how Flowics can help with these new remote production workflows.

Today, we’d like to share some examples of how our clients have been successfully implementing these processes.

“Kick-Off” and “Detrás De La Pelota” are two shows on the WIN Sports network. “Kick-off” is a daily sports update that, before the spread of COVID 19, was produced on-site in their studio and broadcasted on Linear TV. “Detrás De La Pelota” is a program that conducts interviews with women soccer players that was launched directly on digital platforms. Now, both are broadcasted on Facebook Live and Twitter Live.

This new landscape comes with new challenges. The need for teams to work from home led WIN Sports to revamp the way in which they were producing and airing their shows. In the case of “Kick-Off,” this meant a complete overhaul of how the show was produced and operated. On the other hand, “Detrás De la Pelota” a new show produced 100% remotely.

“Our greatest challenge in the case of “Kick-Off” was producing a broadcast that looked similar to that of television, that had the graphic capabilities and dynamic nature of the program. For “Detrás De La Pelota” we sought an interactive space for those who were viewing the content.”

With producers and reporters working remotely, Skype is being used to host conference calls with various participants. For the Live Stream production, the team has been using OBS platform (integrating Skype feed via the OBS NDI plug-in) and generating all of the graphics (lower-thirds, full-screen graphics, audience participation mechanics, etc.) with the Flowics Cloud Graphics platform.

“Before everything was static. We didn’t have live interactions with our audiences, and there was no design. With this tool we’ve been able to adapt all of the graphic components.” 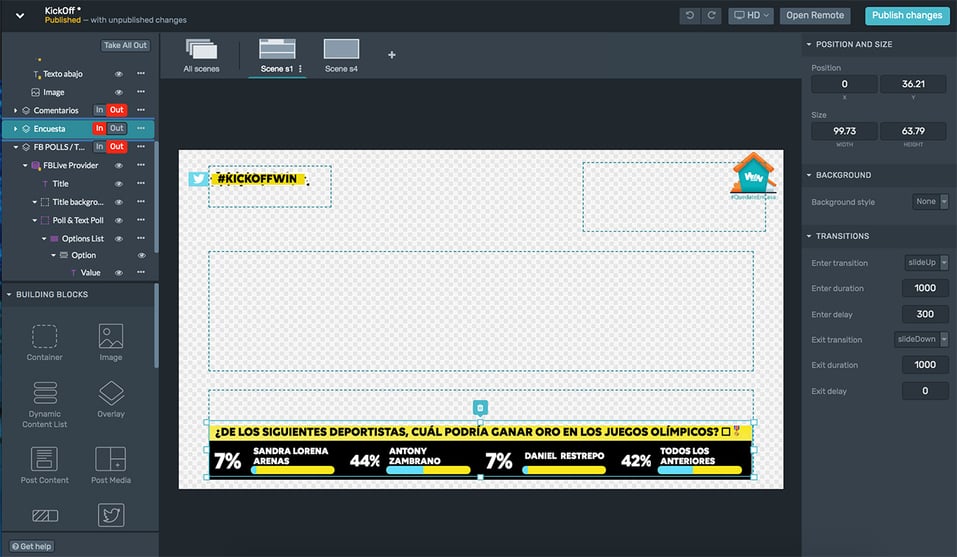 The remote control interface allows production teams to insert and remove graphics on-air and manage social media and other participation formats. All of this can be done using Flowics’ unique interface.

Flowics’ remote control application to play in & out on-air elements.

Interactivity During the Show

Migrating to digital platforms also means new opportunities for audience interaction. Both Facebook and Twitter have native polls that allow for immediate participation with the audience, directly on the platform. Flowics, upon integrating these mechanics, allowed WIN Sports to make strides in providing audience participation activities and displaying results on-air, an offering that forges a stronger bond with the audience. 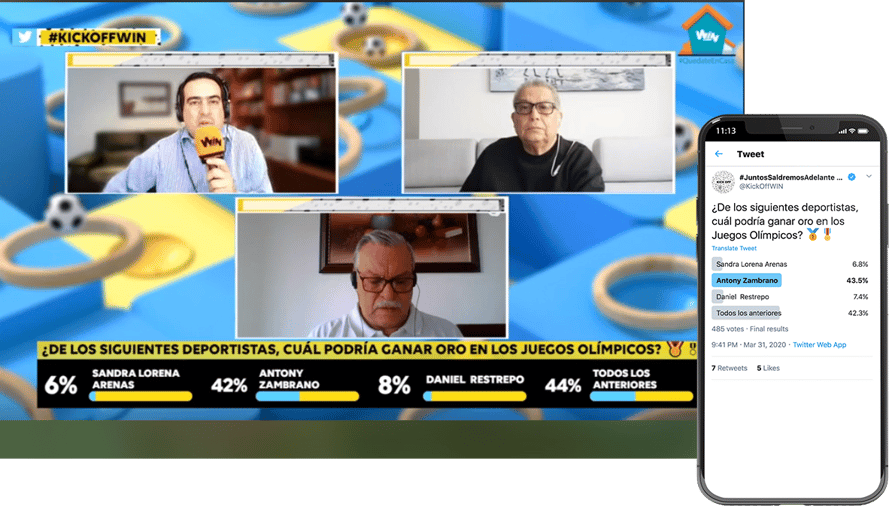 Twitter polls displayed on air during the show “Kick-Off”

“Flowics helped give a professional look to our broadcasts that aligned well with our network’s quality standards. Beyond just giving us this huge advantage, we’ve also been able to interact with the people who watch our live shows during this uncertain time.”

If you’d like to learn more about how Flowics can help with remote production for your show, don’t hesitate to contact us and request a demo! 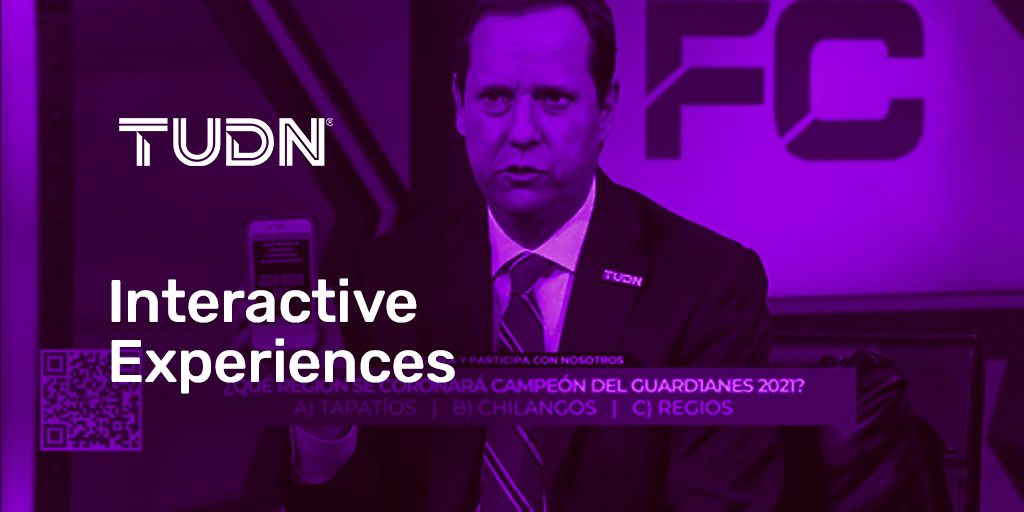 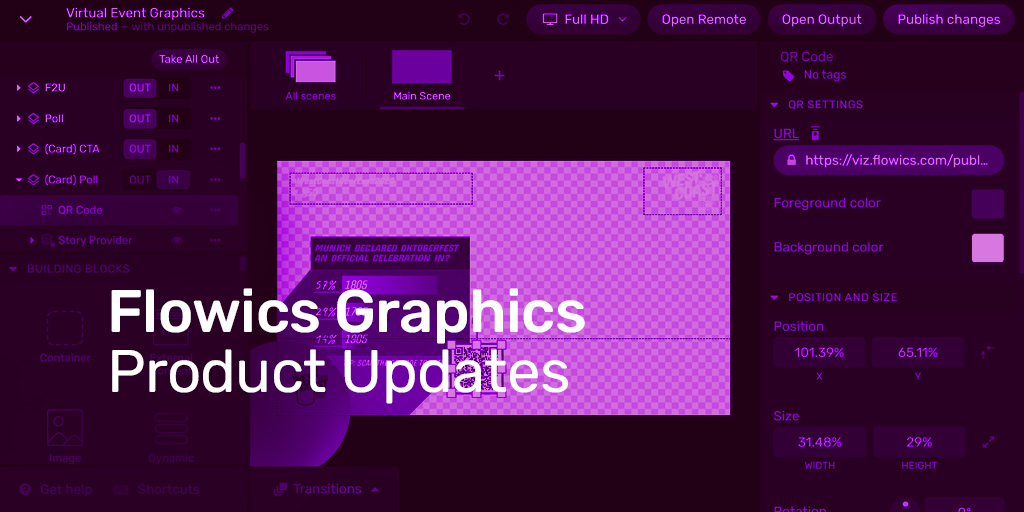 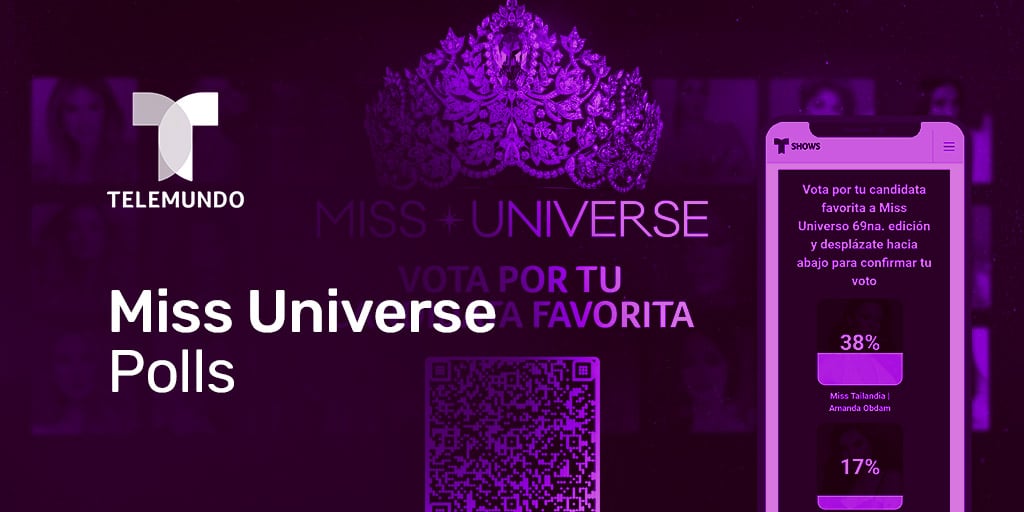 Telemundo triples audience participation for the 2021 edition of Miss Universe 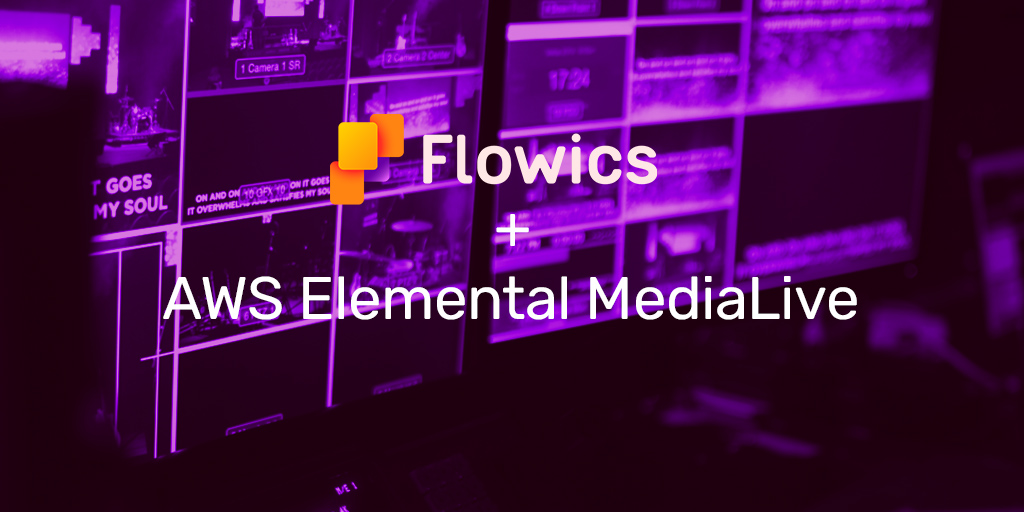